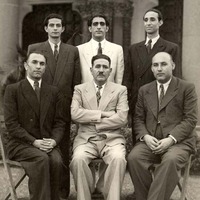 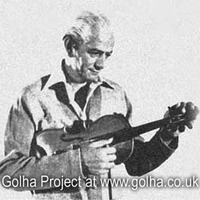 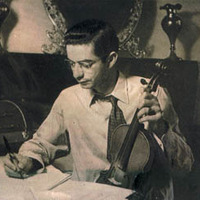 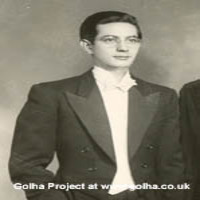 Composer and one of the five prominent violinists (the others being Tajvidi, Yahaqqi, Khurram, and Badi‘i) performing on the Golha programmes. He studied with different masters, but his main teacher was Abu’l-Hasan Saba. He made a name for himself in Tehran at the age of twenty as a music prodigy and instrumentalist known for the delicate tones of his expression. He was the founder of the Romantic school of Iranian violin performance and the public profile and personality that he cut in society was almost Menuhin-like (Yehudi Menuhin, the American violinist 1916-1999). Accompanying Sayyid Javad Badi‘zada and ‘Ismat Dilkash, he made two journeys to India to record gramophone discs. His compositions, which juxtaposed a fine-tuned romanticism with formalistic classical structure along with innovations in rhythm and melody, brought him much fame and were later performed by numerous vocalists. He performed in the Golha-yi javidan, Barg-i sabz, and Golha-yi rangarang programmes and many of his lovely compositions were performed on the Golha-yi rangarang and Yik shakh-i gol and some of them were arranged by Javad Ma‘rufi as well. He temporarily retired from all musical activities in 1958 but later in 1965 returned to perform in Tehran Radio and Television, where he also conducted orchestras.

Just as his artistic talent had blossomed early, so it met an early decline, and before long the level of his performance sank to the common level. The compositions that he wrote during the years 1960-1975 thus lacked the impressiveness and extraordinary beauty that had characterized his works done during 1948-1958. Nonetheless, numerous recordings made of his performances and compositions belonging to those years when his creative powers were at their height bear ample witness to the originality of his transient genius. Suffering from physical complications during his last twelve years of his life he ceased all musical activities. His works include three albums of gramophone records entitled Taknavazi-yi Violin (Violin Solos) accompanied by Husayn Hamadaniyan on the tumbak (Tehran; Ahang-i Ruz 1970). There is also a monograph of him written by Habibullah Nasirifar, entitled Zindigi va asar-i Mihdi-yi Khalidi (The Life and Works of Mihdi Khalidi, published the editor, Tehran: 1990).