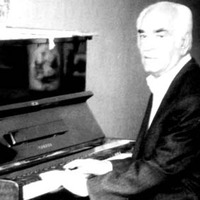 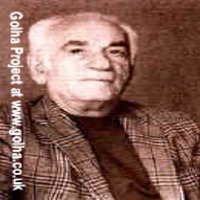 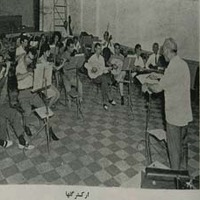 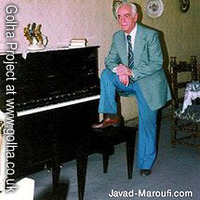 Pianist and instructor of the piano, as well as a composer, arranger, and conductor of the Golha orchestra. He was born into an aristocratic Qajar family with Sufi inclinations, which was acquainted with music. He received his education from his father, Musa Ma‘rufi, as well as from Tatiana Kharatian and ‘Ali Naqi Vaziri. Javad Ma‘rufi became professionally active in the field of music around 1929. He was active in many domains of music and his activities encompassed a period of sixty years. He figures as one of the prominent Iranian pianists who was inspired by ‘Ali Naqi Vaziri’s aesthetic philosophy to found a school of piano performance, and who reared many students (including Anushiravan Ruhani and Ofillia Partow), such that today the theory and art of piano performance in Persian music remains very indebted to him. He also wrote musical compositions, some being arranged for the piano and others predominately orchestral in their musical character. His compositions have been recorded on both gramophone records (1946-1992) and CDs. His activities included teaching piano at the National Conservatory of Music, the College of Music, and at Tehran University, performing on the piano at the Orchestra of the National Music Society, serving on various music councils of Radio Tehran, recording Persian music repertoires for the piano, and finally, performing in the orchestra for the Golha programmes.

Javad Ma‘rufi and Murtaza Mahjubi were the two most prominent pianists who performed on the Golha programmes. From the very first day of the establishment of the Golha orchestra, he performed in it. More than eighty solo performances of his have been recorded in the Golha programs. His performances that were accompanied by ‘Abdul-‘Ali Vaziri and Ghulam Husayn Banan (Ma‘rufi’s favourite vocalists) reflect his modernist inclinations and the poetic and Chopin-like style of his piano performance. His interest in the school of ‘Ali Naqi Vaziri is reflected in his arrangements that he made for the orchestra in more than two hundred and thirty programmes (conducted by him during the years 1956-1976) from various compositions by ‘Arif, Shayda, Darvish Khan, Musa Ma‘rufi, as well as folk tunes and from his own compositions as well. The zenith of his performance on the piano, which shows his sublime interpretation of Khaliqi’s and Vaziri’s musical philosophy, is reflected in a piece titled Hala chira (“Why Now?”) on the Golha-yi rangarang programme no. 210, composed by Khaliqi with Banan as its vocalist.

Compared to the arrangements of Vaziri and Khaliqi, those of Javad Marufi are simpler and less dynamic. In these arrangements the main role is accorded to the string-bow instruments and there is very little percussive diversity. ‘Ahdiyya and Ilahi were among the last vocalists to accompany him in the Golha, insofar as they were capable of performing in the tranquil and poetic style he preferred. With advent of the 1979 revolution Javad Ma‘rufi found himself at odds with the new social milieu and so retired from all public affairs, limiting his activities to giving classes on a private basis in his home, focusing on tutoring students of the younger generation. Ma‘rufi was a mainstay of the Golha programmes and stands shoulder to shoulder with other eminent Golha artists such as Ruhu’llah Khaliqi, Murtaza Mahjubi, and ‘Ali Tajvidi. His released CD albums include Murgh-i haqq (The Divine Bird) and Fantiziha (Phantasies) (Tehran: Ava-yi Khurshid 2007), introduction and annotation by Sayyid ‘Ali Riza Mir‘alinaqi