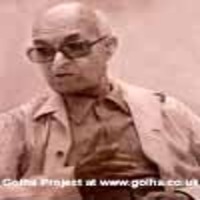 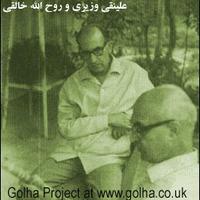 ‘Alinaqi Vaziri (1918-1980) was the most prominent Persian classical musician of the late Qajar and Pahlavi periods, renowned as a tar instrumentalist, composer, theoretician, author, and founder of the earliest academies devoted to classical Persian music. In addition to being a young tar instructor, he was a high-ranking officer in the army – better known to the general public by his military sobriquet: “Colonel Vaziri.” When he was thirty years old, however, he bade farewell to his military career and proceeded to spend five years in Germany and France studying European classical music. Upon return to Iran, he founded the Academy for the Advanced Study of Music (Madrasa-yi ‘ali-yi musiqi) and its accompanying orchestra, and thence embarked upon educating the first generation of young and talented musicians. His activities were quite broad and extensive; these include authorship of textbooks for teaching the tar, violin, harmony, and musical theory, composition of different types of music in various genres, expert performances on the tar in which he exhibited tremendous technical skill, establishing a cinema and theatre especially for women and recording of many gramophone records. He was also an author of books for children, and even composed music for children. In 1934 he fell from Reza Shah Pahlavi’s favour, and then proceeded to retire from musical activities altogether and took up a teaching post at the University of Tehran where he established (for the first time in Iran) teaching departments in the fields of Archaeology and Aesthetics. He became an emeritus professor at the University of Tehran in 1972. In 1975 he instituted the first foundation that handed out awards for Persian music (the fate of this foundation in the post-revolutionary Iran is unbeknownst).

Although Vaziri had retired from all musical activities twenty years prior to the institution of the Gulha programmes, he still continued to be consulted as an eminent authority and maestro of Persian music. Without a doubt when the Gulha programmes were first aired in 1955, his former students, Ruhu’llah Khaliqi, Abu’l-Hasan Saba, and Javad Ma‘rufi, had consulted with him about their performance and content. In fact, the sound of the Gulha harmonic orchestra represents a kind of reprise to Vaziri’s orchestra founded decades earlier in the years 1925-1931, the sounds of which resonate in the Gulha orchestra, but with greater refinement and accomplishment. It is also noteworthy that the Gulha and its orchestra served as a historic and unique occasion to remix and re-present Vaziri’s previously unperformed compositions to the public. These compositions had been vested with his loyal student, Ruhu’llah Khaliqi who longed nothing more than that the invaluable compositions of his master be broadcast publicly. The gramophone records of the day (1930) with their seven-minute time-limit recording time were not suitable for recording such works; besides, the relatively advanced instrumentation techniques and radio recordings at that time (1955) could not be compared to those of the preceding two decades.

Most of Colonel Vaziri’s compositions were conducted by Ruhu’llah Khaliqi and then by Javad Ma‘rufi. It is also said that one or two programmes were also conducted by Vaziri himself. In these classical compositions, the elevation, magnificence, and power of classical Persian music is conveyed to the listener’s ear. A number of vocalists such as ‘Abdu’l-‘Ali Vaziri, Ghulam-Husayn Banan, ‘Abdu’l-Wahhab Shahidi, Fakhta’i, Ilahi, and Puran performed his compositions; amongst these Banan and ‘Abdu’l-‘Ali Vaziri in my opinion produced the best performances. At any rate, the Gulha programmes, and above all, the efforts made by Ruhu’llah Khaliqi made a significant contributions to introducing the compositions of Vaziri to the general public.

Vaziri’s own solo performances on the tar were simply marvellous and in every way comparable to the abilities of famous classical music personalities of Europe during the time, such as, for instance Fritz Kreisler (1875-1962); these, however, were not recorded on any of the Gulha programmes. The Persian romanticism of the time (1962 onward) looked with disfavour on his style, nor were any of the young tar instrumentalists of the day easily able to attain to Vaziri’s sublime rank in performance. Two CD albums containing his solo performances and orchestral works have been recently released (Tehran: Mahur 1998 and 2001). A collection of his articles titled Musiqi-nama-yi Vaziri (Tehran: Mu‘in 1999) is in print, edited by Sayyid ‘Aliriza Mir ‘Alinaqi.