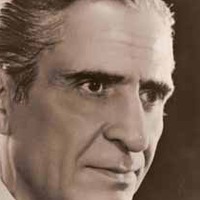 Vocalist specializing in classical Persian singing (avaz) and popular ballads (tasnif) and one of the six great male singers performing in the Golha programmes, the others being Banan, Shahidi, Mahmudi Khvansari, Gulpayigani, and Shajariyan. Despite facing opposition from both his family and workplace (the army), he first studied music with Maestro ‘Abdu’llah Hijazi, before he began to give performances on the radio from 1945 onwards. In the beginning he performed anonymously, but at the suggestion of Ruhu’llah Khaliqi, he took the stage-name of Fakhta’i (meaning ringdove). He was one of the very first vocalists who joined the Golha programmes. Qavami and the Golha made quite significant contributions to helping each other achieve fame. Many performances of his were recorded on the Golha programmes between 1956-1975, during which time he performed mostly classical singing and, at times, sang compositions by the great Persian composers such as Murtaza Mahjubi, Husayn Yahaqqi, Majid Vafadar, ‘Ali Tajvidi, and Humayun Khurram. Qavami’s singing style and character manifested a distinguished seriousness and sagacious congeniality through which one sensed the radiance of delicate and sensitive human feelings, vouchsafing invaluable masterpieces of Persian classical avaz to the Iranian public. Performing with outstanding soloists like Murtaza Mahjubi and Jalil Shahnaz, his skillful artistry found its perfect backdrop and reflection. His vivid and resonant voice, his intuitive appreciation of classical Persian poetry, his quite precise and refined powers of audition (proverbially famed as his “absolute” power of hearing), and the obvious purity of the spiritual feeling flowing through his songs made him one of the most exalted Persian vocalists of the twentieth century. A number of vocalists attempted to imitate his style; however, despite superficial mimicking and some obvious similarities, none of them have been willing to acknowledge the failure of their imitations. Several albums of his works have been released, including Naghma-yi fakhta (“Song of the Ringdove”) presenting his vocals and recitation. Like his stage-name (“Ringdove”) Qavami was himself the very nightingale of the Golha.