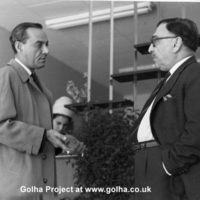 Rahi Mu‘ayyiri (1908-1968) was one of the leading song-writers and poets of Iran. His primary and secondary schooling was in Tehran, and on graduation, he worked for various governmental agencies. At the same time, he was an active member of Nizami Literary Society directed by Vahid Dastgerdi, and the Music Institute of Iran. Although he was extremely prolific as a poet, authoring over 30,000 verses, he remains best known for his love lyrics (ghazals) which follow the style of Sa‘di and Hafiz, while also being influenced by other great classical poets such as Nizami, Rumi and Sa’ib. Near the end of his life he collaborated with Davoud Pirnia, acting as literary advisor for him in the production of the Gulha-yi rangarang programmes on Iranian National Radio, where many of his own poems were also set to music by Iran’s greatest composers and sung by leading vocalists.

Rahi Mu’ayyiri, Muhammad Husayn Buyuk (1871-1928), son of Muhammad Hasan Mu’ayyad Khilwat, a musician and poet with the nom de plume Rahi, grandson of Mu’ayyir al-Mamalik (Nizam al-Dawla), a contemporary ghazal poet born in Tehran. In his saterical and critical poetry he used the noms de plume Zaghchih, Shah-i Pariyun, Gushihgir, and Haqqgu. His grandfather, Nizam al-Dawla, was a treasurer under the Qajar Nasir al-Din Shah and his ancestors had held high ranking offices from the reign of the Afsharid Nadir Shah to the end of the Qajar period. He hailed from a family of srtictic and poetic appreciation, since the members of that distinguished family loved art diserned literary taste. Mirza ‘Abbas Furughi Bistami, the distinguished ghazal poet flourishing under the Qajar Nasir al-Din Shah, was one of the members of the family. Having received his education, Rahi assumed government offices and continued his studies of Persian poetry and amassed vast knowledge which added to his poetical vigor. He became a member of most of artistic and literary circles and societies and made significant contributions to Persian art and letters. He was profoundly attached to poetry, music, and painting from his early days and was proficient in these domains. He composed his first quatrain at the age of 17. In his early poetical career, he attended the sessions held by Hakim Nizami Literary Society, directed by Wahid Dastgirdi and was an active member. He was also one of the founders and distinguished members of the Literary Society of the Persian Academy. He was also a member of the Musical Society of Iran. His poetry was published in most of the literary periodicals and newspapers. His political, satirical, and critical compositions appeared in the Baba Shamal newspaper and the Tihran Musawwar journal. He was also acquainted with music and painting and late in life collaborated with Davud Pirniya in selection of poetry for the Gulha-yi Rangarang-i Radio Programs and served as the director of the programs for a while. He also traveled to different countries, including Turkey (1957), the Soviet Union (1958), Italy and France (1960), and twice to Afghanistan, to attend the none hundredth anniversary of the death of Khwaja ‘Abd Allah Ansari and again in 1966. His last journey was to England (1967) for a surgical operation. He died at the age of 60 and was buried in the Zahir al-Dawla Cemetery, Shemiran. He is indubitably one of the few distinguished contemporary ghazal poets. His poetical style was influenced by poets like Sa’di, Hafiz, Rumi, Sa’ib, Mas’ud Sa’d, and Nizami, though above all he was profoundly attached to Sa’di and such affection for Sa’di has given him an exquisite delicacy, such that Sa’di’s fluency, delicacy, and simplicity of expression is reflected in Rahi’s ghazals. In his delicate imagery and ideas, he at times resembles Sa’ib, Kalim, Hazin, and other poets of the Isfahan School, and at times, his consistent and fluent idiom reflects the ‘Iraqi style. The lyrical tinge of his ghazals and his delicate diction and themes provide him with poetical distinction. His well-known poetry includes Khazan-i ‘Ishq, Nawa-yi Niy, Daram Shab u Ruz, Shab-i Juda’i, Yar-i Ramidih, Yad-i Ayyam, Bahar, Karawan, Murgh-i Haqq, and Khazan-i ‘Ishq, the last of which is the well-known tasnif, well-known as Shud Khazan Gulshan-i Ashina’i, performed on the vocals by Badi’ Zadih in the Dastgan of Humayun. Rahi’s poetry reflects his selectiveness and precision, such that he revised his ghazals tens of times, making changes to their wording until pleased with them, befre he had them published. His poetical compositions have been incorporated in biographies and his brilliant poetical vigor has been praised by biographers. Further, his poetry in Persian original or translation has been included in all anthologies of Persian contemporary poetry appearing abroad. He is distinguished by his liberal mind, magnanimity, delicacy of expression and creation, inward purity, of content, and elegant appearance. The number of his poetical compositions exceeds 30,000 couplets, 2,000 of which have appeared in his collection of poetry, Sayih-ha-yi ‘Umr. Azadih is a collection of his lyrics and Gulha-yi Jawidan is an anthology of distinguished classical poets and their biographical accounts.