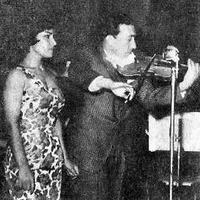 Violinist and composer. He studied with Abu’l-Hasan Saba, Mihdi Khalidi, and Ahmad Furutanrad and made his first performances with his elder cousin. He performed on the violin in different orchestras and achieved fame for his compositions during the years 1955-1975. He conducted the great orchestra of Radio Tehran from 1953 to 1956, and performed in (as an accompanist) and wrote  compositions for the Golha programmes between 1968-1979, which Kurus Sarhangzada, Iraj, and Jamal Vafa’i sung. His solo performances are not heard on the Golha programmes. A collection of his compositions was published in two books entitled Sad ahang (One Hundred Songs) and Naghmih-ha-yi dilangiz (Heartwarming Melodies). Lashgari owed his fame mainly to the compositions he wrote for the radio rather than his work in the Golha programmes.