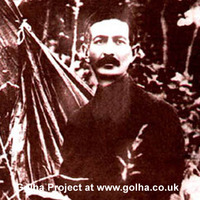 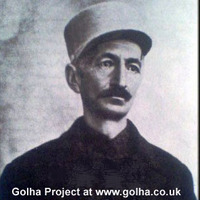 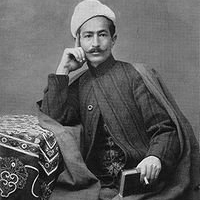 ‘Arif Qazvini, Abu’l-Qasim (1879-1933), poet, lyricist, and vocalist who flourished during the period of Persian Constitutional Revolution (1906-1914). Regarded as one of earliest composers of music, he was the leading song-writer and vocalist of popular ballads (tasnif) inspired by emerging Iranian nationalist thought. He studied classical singing (avaz) with traditional masters in his youth in his hometown Qazvin, but through his elegant appearance, sweet voice, and handsome looks he soon found his way into aristocratic circles of the Qajar court. He was initially groomed to be the lead vocalist of the Qajar court, but due to his sympathy towards the Constitutional Revolution and its revolutionary ideals, he changed his course, quickly turning into the most popular artistic personality from the time of Persian Constitutional Revolution down to the early Pahlavi reign (1904-1924). Although no mass media existed in Iran at this time and his voice was not recorded so that people could listen to it, his concerts nonetheless became a popular phenomenon throughout the land. Throughout revolutionary Iran he spread his message through the concerts that he gave at the Grand Hotel in Tehran, where he sung his ballads of socio-political criticism, giving a voice to his poetry which expressed the ideals of the Constitutional Revolution. Besides his abilities as a vocalist, he also achieved considerable fame in the domains of poetry and satire.

‘Arif Qazvini ceased to perform in public following the ascendancy of Reza Shah Pahlavi to the throne in 1924. The death of the national hero, Colonel Muhammad Taqi Pisiyan (1923) depressed and confined him to his home, with numerous physical and psychological ailments also contributing to his seclusion. He spent the last seven years of his life in solitude and disappointment in the valley of Murad-bayg near Hamadan. ‘Abd al-Rahman Sayfazad and Sayyid Hadi Ha’iri independently collected and published all his poetry including his nationalistic ballads (tasnif). The most complete collection of these song-ballads or tasnifs was compiled and published by the setar instrumentalist and researcher in the field of Persian music Arshad Tahmasbi (b.1955). A number of his tasnifs were performed by the eminent Iranian female vocalist, Qamar al-Muluk Vaziri (1905-1958), recordings of which exist on gramophone records (1924-1942), but these mostly feature his lyrical rather than political poetry.

His name and memory were revived through the Gulha programmes created by Davud Pirniya and later on through the arrangements of Ruhu’llah Khaliqi. Davud Pirniya was deeply interested in ‘Arif’s patriotic song-ballads, patriotism and nationalism standing second to his main interest in Sufism. For this reason, Pirniya devoted a number of the Gulha programmes to ‘Arif’s memory, where mention was made of his elegant tasnifs with their passionate hue of nationalism. Attending a concert held by ‘Arif in 1921, the young Ruhu’llah Khaliqi, who later became one of the most educated maestros of his time, was profoundly moved, which inspired him to make musical arrangements of those melodies for the grand Gulha orchestra. However, owing to political considerations of the day, ‘Arif’s revolutionary poetry was infrequently used in these programmes. Khaliqi aimed at making use of harmony, powerful instrumentalization, and the vocals of two eminent vocalists who were well versed in the literature in recording these programmes. Ghulam-Husayn Banan (1911-83) and Ilahi (1934-2007), two well-trained and accredited vocalists promoted by Khaliqi, produced the best performances of these compositions. Following Ruhu’llah Khaliqi, Javad Ma‘rufi, the skilful pianist, arranger, and conductor, developed an interest in performing ‘Arif’s tasnifs anew and arranged them for the grand orchestra of the Iranian national radio. ‘Arif’s own vocals were never recorded on any gramophone record. Although all the tasnifs of ‘Arif were not sung in the Gulha and to date no album featuring them is available, it is worthy of note that after about forty years, Iranians still associate the name of ‘Arif with the Gulha programmes.