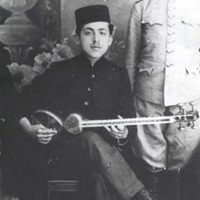 Composer, a prominent student of Darvish Khan, and one of the most notable Persian classical tar instrumentalists. His fame in the years 1928-35 was owing to his skillful solo performances on the tar and the beauteous melodic compositions he wrote for Qamar al-Muluk Vaziri and Muluk Zarrabi which were recorded on gramophone records. Owing to unknown circumstances, his own performance skills were not made use of in the Gulha programmes. However, due to the great interest that both Ruhu’llah Khaliqi and Javad Ma‘rufi had in Nay Davud’s compositions, they arranged some of these for the Gulha programmes, changing their tempo and lyrics in certain places, which were performed by the great orchestra. During the 1970s, Muhammad Riza Lutfi also rearranged and performed some of the original versions of Nay Davud’s compositions. Nay Davud’s released works include a series of recordings of the Persian classical modal musical system (radif) and some gramophone records. Since 1981 he has resided in the United States, but owing to his advanced years he has ceased his musical activities. His works include Radif-i Ustad Murtaza Neydavud (6 cassettes, Tehran: Chaharbagh 2006).