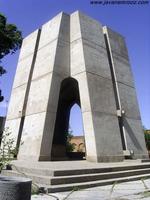 Awhadi-yi Maraghi-yi Isfahani, Rukn al-Din, Awhad al-Din  (1271 or 1274-1337), son of Husayn, a mystic and poet whose name has been thus recorded in sources. His title Awhadi is recorded as Awhad al-Din and Rukn al-Din in different sources and his attributive title (nisba) is attested as Isfahani and Maraghi in different sources, since his father hailed from Isfahan and he was born in Isfahan. Sources are not unanimous on his hometown, the majority of which have mentioned it as Maragha though he reportedly spent most of his life in Isfahan. Nonetheless, Sa'id Nafisi, based on some of Awhadi's poems, regards Isfahan as his hometown, though he later settled in Maragha. Taking such view for granted, he apparently departed his hometown, Isfahan, to travel to many cities. In his Divan, he makes references to Basra, Baghdad, Damascus, Sultaniyya, Karbala', Kufa, Najaf, Qum, and Hamadan. He stayed in Azerbaijan as a stranger for a while until he entered the Ilkhanid seat of government before 1306 and departed for Tabriz under Abu Sa'id Khan. The sultan and his vizier, Ghiyath al-Din Muhammad ibn Khwaja Rashid al-Din Fadl Allah warmly received him. He settled in that Tabriz from 1331 to 1332 where he died and was buried where his. Awhadi has been praised by titles such as mystic ('arif) and monotheist (muwahhid). His schooling is not known. His Divan, including qasidas, tarji'-bands, ghazals, and quatrains run to 8,000 couplets. His Dah-namih (Ten Epistles), also well known as Mantiq al-'Ushshaq, completed in 1304, includes about 6,000 couplets. The last work treats of a lover and a beloved who communicate their love in an epistolary style. This long poem was composed at the suggestion and in the name of Khwaja Nasir al-Din Tusi. Jam-i Jam, in 4,571 couplets, completed in 1331 or 1332, was composed on the model of Sana'i-yi Ghaznavi's Hadiqat al-Haqiqa and was dedicated to Ghiyath al-Din Muhammad, vizier to the Mongol sultan. Although the work was composed on the model of Hadiqat al-Haqiqa, but it is innovative in terms of subject arrangement and even the nature of its topics. It is a comprehensive work on ethics and Sufism and also one of the best sources for conducting studies on the social milieu of the time. Following a detailed preamble, it falls into three dawrs (circles): the first is devoted to the origin of creation; the second treats of the manner of living of the people of the world; the third deals with the hereafter. Despite including exalted meanings, it is fluent, elegant, and free from complicatedness and amphibology. The ten epistles are regarded as specimens of excellent Persian prose embracing many a novelty in their inclusion of brief parables, elegant and delicate ghazals in mathnavi couplets, and fluency and simplicity of style. His qasidas treat of admonitions and mystical truths and his ghazals and tarji'-bands are imbued with mystical points and lyrical meanings.