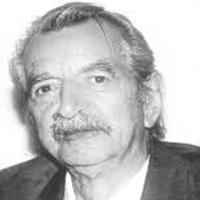 Khurasani, ‘Imad (1921-2005). Poet, lyricist, and vocalist. ‘Imad al-Din Hasan Burqa‘i was born into an old and affluent family of Khurasan. Receiving his literary education in early youth, by his twenties he had become a poet of considerable repute. A passionate and scandalous love affair led to his notoriety in Iran during the years 1945-1950. ‘Imad was also a talented vocalist who had a very pleasant voice and was acquainted with traditional musical modes of Persian music (dastgah), but he showed no interest in becoming a professional singer.

From the very beginning of the establishment of Gulha programmes, his poetry was used and although he did not specifically compose any lyrics for any particular vocalist, his passionate erotic ghazals were enthusiastically performed by vocalists like Banan. In three of the Gulha programmes (Barg-i sabz 20, 20b, Rang-u-rang 106) ‘Imad Khurasani’s skill as a singer is revealed. In the first two of these programmes, he accompanied Rida Varzandih on the santur. His Divan or Collected Poems has been published with an introduction by Mihdi Akhavan Salis. It may be said that the Gulha programmes made a significant contribution to his fame as a poet.