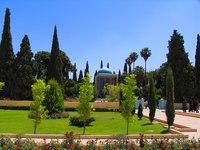 Sa‘di (d. circa 691/1292) was the leading master of the erotic lyric (ghazal) in Persian in the thirteenth century. He is equally renowned for his “Rose Garden” (Gulistan, composed in 1258) penned in the most exquisite Persian rhyming prose interspersed with poetry. For centuries, the Gulistan has been the first book of Persian placed as a primer in the hands of school-children learning Persian. He also authored a long (4,100 couplets), Sufi poem composed in rhyming couplets, called “The Orchard” (Bustan), modelled on Sana’i’s Hadiqat al-haqiqat, which is divided into ten sections on (i) Justice, Management and Good Judgment, (ii) Beneficence, (iii) Love, Intoxication and Delirium, (iv) Humility, (v) Contentment, (vi) Resignation, (vii) Education, (viii) Gratitude for Well-Being, (ix) Repentance, and (x) Supplication. His writing is full of moral advice, admonition and bon mots, but he always stresses the relativism of all ethical absolutes. As E.G. Browne observed, “the real charm of Sa‘di  and the secret of his popularity lies not in his consistency but in his catholicity; in his works is a matter for every taste, the highest and the lowest, the most refined and the most coarse.” Sa‘di’s enduring popularity is proven by the Gulha programmes where his poetry and prose are discussed, declaimed, sung and set to music than any other Persian poet, including even Rumi and Hafiz.