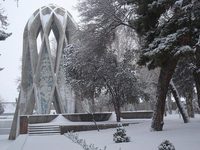 Khayyam Nayshaburi, Khwaja Imam Hujjat al-Haqq, Nusrat al-Din, Ghiyath al-Din, Abu al-Fath, Abu Hafs ‘Umar ibn Ibrahim (b. 417/440, d. 515/525), a philosopher, mathematician, astronomer, writer, and poet hailing from Nayshabur. He studied sciences in his hometown with distinguished scholars and teachers, e.g. Imam Muwaffaq Nayshaburi, and became well versed in philosophy and mathematics in his early youth. He was a contemporary of Maymun ibn Nujayb Wasiti; Imam Abu al-Muzaffar Asfizari; Hakim Abu al-‘Abbas Lawkari, ‘Abd al-Rahman Khazini, and Imam Muhammad Ghazali. He departed Nayshabur for Samarqand in 1068 and supported by Abu Tahir ‘Abd al-Rahman ibn Ahmad, the chief judge of Samarqand, authored his well-known work on algebra. Then, he went to Isfahan and settled there for 18 years. Patronized by the Seljuk Malikshah and his vizier, Nizam al-Mulk, and together with some scholars and mathematicians of renown, he conducted astronomical studies in an observatory, constructed by Malikshah the fruits of which were rectification of the calendar used at the time and preparation of the Jalali (Malikshah’s title) Calendar. Consequent to the assignation of Nizam al-Mulk and then Malikshah death, discord raged among the latter’s sons over accession to the throne and ignoring scholarship, scholars, and the observatory led Khayyam to depart Isfahan for Khurasan. He spent the rest of her life in major cities of Khurasan, particularly Nayshabur and Marw. Most of his scholarly works were put into practice in Isfahan after his departure. Our distinguished philosopher’s renown is mainly indebted to his philosophical quatrains which are well-known in the world and are available in translations in major languages of the world, like French, English, German, Italian, Russian, Arabic, Turkish, and Armenian. Editions prepared by Zhukovski and Arberry have been published many times. Contemporary scholars disagree about the number of quatrains originally composed by Khayyam and those attributed to him. Some have even rejected their attribution to Hakim ‘Umar Khayyam, maintaining that there was another mathematician and a poet bearing the same name.  Nonetheless, the earliest sources making mention of Khayyam’s quatrains include Shahrzuri’s Ta’rikh al-Hukama’ and Najm al-Din Razi’s Mirsad al-‘Ibad, followed by Jahangusha-yi Juwayni; Tarikh-i Guzida; and Munis al-Ahrar. References have been made in early sources to his Persian compositions in verse. No complete and reliable manuscript of Khayyam’s quatrians is extant and many of the quatrains attributed to him are later compositions by other poets, hence the discussions raised as to the number of authentic quatrains. The main themes of his quatrains include doubt, perplexity, meditation on death, and carpe diem. It is worthy of note that some of his ideas are similar to those of Abu al-‘Ala’ Ma’arri, the well-known Arab poet flourishing in the fifth century. His works include a treatise titled Jabr wa Muqabala (algebra), regarded as his most significant composition on mathematics which he dedicated to the Chief Judge (Qazi al-Quzzat) Abu Tahir. It was translated into French by Francois Wepke in 1851 and was published with Arabic original text and the editor’s commentary and annotations. Ghulam Husayn Musahib rendered it into Persian. Musahib’s translation, some other treatises by Khayyam, and discussions on the same were published by Anjuman-i Athar-i Milli-yi Iran in 1960 under the title Hakim ‘Umar Khayyam bih ‘Unwan-i ‘Alim-i Jabr. Other works by him include: Risala fi Sharh Ma Ashkala min Musadirat Kitab Uqlidis, a manuscript of which is preserved at Leiden; Zij-i Malikshahi, co-authored by Khayyam; Mukhtasari dar Tabi’iyyat; Risala dar Wujud, in Persian, dedicated to Fakhr al-Mulk ibn Mu’ayyad, a manuscript of which is available with the British Library, London, whose title reads: Risala bi-‘l-‘Ajamiyya li-‘Umar ibn Khayyam fi Kuliyyat al-Wujud; Risala dar Kawn wa Taklif, the last three are attributed to Khayyam by Shahrazuri; Lawazim al-Amkina; Risala fi ‘l-Ihtiyal Ma’rifat Miqdaray al-Dhahab wa ‘l-Fizza fi Jism Murakkab minhuma, preserved at the Goethe Library, Germany. The treatise well-known as Lawazim al-Amkina is about seasons and the causes of differences in the climates of lands, the last two treatises have been attributed to him in Tarikh-i Alfi; Nawruznama, a treatise in Persian about the origins of the feast of Nawruz, its progenitor, and royal customs of its celebration. Edward Fitzgerald rendered Khayyam’s quatrains into English with utmost elegance almost standing on a par with their Persian originals in terms of eloquence and elegance. The translation was published in London in 1859 and was reprinted several times in England and the United States, though its copies soon became rarities. Since the publication of Fitzgerald’s translation, Omar Khayyam’s Ruba’iyyat, has been popularly received, though his quatrains have attracted the attention of the educated as well as and different interpretations of his philosophy have been presented and the number of such interpretations has been on the increase. Numerous societies have been established in his name in Europe and the United States. Khayyam Nayshaburi was a mathematics genius, an innovative astronomer, and unrivalled poet. His quatrains are quite simple, devoid of ornate embellishments, but eloquent, vigorous, elegant, terse, and imbued with exalted meanings.