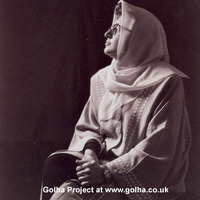 Akhavan, Hingama (1956-), vocalist specializing in classical Persian singing (avaz) and performance of popular ballads (tasnif) and one of the last female singers to be featured in the Gulha-yi Taza (“Fresh Flowers”) programmes under the directorship of Hushang Ibtihaj. Leaving her hometown of Fuman in the province of Gilan in northern Iran, Hingama endowed with a lovely voice (whose maiden name is ‘Ishrat Akhavan) came to Tehran in order to receive further training, and perfect her natural abilities as a vocalist.. She trained at an early age with the great classical vocalist Adib Khwansari, who very generously fostered her talent.

She appeared very briefly on various Iranian radio and television programmes in the late 1970s but her media career came to an abrupt end in 1979 following the ban imposed by the newly formed Islamic Republic of Iran on broadcasting the voices of female singers. However her performances before the revolution of 1979 had been quite impressive and had brought her much publicity and popularity among the general public who had been touched by the delicately pure, sorrowful, nostalgic tenor of her rich, powerful and velvety voice. These peculiar qualities of her vocal artistry had been evident in her performance on and recording of a number of classical works by Murtaza Naydavud, which had been performed by Qamar al-Muluk Vaziri (1903-59) in the years 1927-28, these abilities reaching their zenith in the songs she recorded alongside the tar instrumentalist and composer Muhammad Riza Lutfi, who made remarkable endeavours to revive and perfect such works. Her performances with Lutfi and the Shayda Ensemble in the “Fresh Flowers of Persian Song and Verse” (Gulha-yi taza) radio programmes are still regarded as valuable performances of classical Persian singing (avaz) and popular song (tasnif) by a very young and talented female vocalist. One audio cassette tape was released by her in Iran in 1976. From 1980 onwards, her career has been restricted to training young students and performing in concert halls for female-only audiences. Although she showed a powerful and capable talent, owing to unfavourable social circumstances it has failed to thrive and bear fruit.