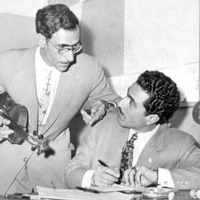 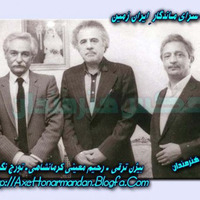 Mu‘ini Kermanshahi, Rahim (b. 1926) Poet, lyricist, and one of the five eminent poets and song-writers for Persian classical music compositions (the others being Isma‘il Navvab Safa, Turaj Nigahban, Bizhan Taraqqi, and Parviz Vakili) from 1950 until today. He began his activities in the fields of poetry, journalism, painting and politics in his hometown, Kermanshah. After moving to Tehran in 1950, he then became famous for writing songs that were performed by leading vocalists on Radio Tehran, many of which can be heard in the Golha programmes. As a poet, Mu‘ini Kermanshahi is known for his powerful imagery, imagination and his skill at allegorical rendition of different ideas and scenes. Standing only second to his fellow-townsman Isma‘il Navvab Safa, he is one of the earliest song-writers to make use of Sufi and mystical motifs in his lyrics. For a long time he served on the Council for Poetry and Music at Iranian National Radio. His activities have not at all been on the wane since the 1979 Revolution. His publications today are prolific, including several collections of poetry, songs, scholarly monographs, memoirs, and a versified history of Iran published in ten volumes, which is over 100,000 couplets long.