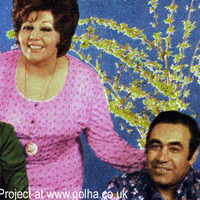 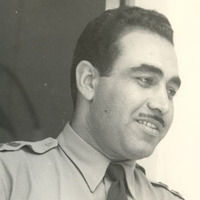 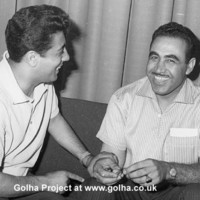 Iraj (ne Husayn Khaja Amiri) was born in Kashan and his father was a singer in the time of Nasir al-din Shah and was his first teacher. Iraj’s first experience performing on the vocals was in passion plays (ta'ziyih) and he was inspired by the style of the renowned vocalist Jalal Taj Isfahan in his early youth. He left Kashan for Tehran, studied with Abul Hasan Saba and joined the military. He performed with the orchestras of Military Academy conducted by Muhammad Baharlu (1307-1385/1928-2006). In the mid 1950’s he was invited by Davoud Pirnia to perform on the Golha programs. Because he was in the military he could not use his real name Husayn Khaja Amiri and he chose Iraj as his professional name. He performed both avaz and terana in the Barg Sabz, Golha Rang a Rang Yek Shakh Gol and Golha Tazeh programs until 1978, performing some of his most beautiful songs accompanied by Parviz Yahaqqi on the violin and Farhang Sharif on the tar. Iraj also appeared on television programs from early the 1960s. From 1342/1963 onward, he was also active in performing on vocals in Persian movies in which he performed hundreds of songs. His powerful and warm voice and his talented performance on the vocals attracted hundreds of thousands of fans. After 1978 he ceased his performances for several years but he began his activities anew in 1997 and besides new performances, released a number of his songs, which had been previously performed on the Golha programs. His son, Ihsan Khajih Amiri, is also a young and popular vocalist performing in the domain of pop music.