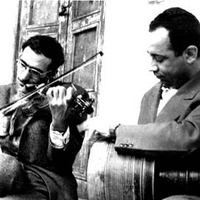 Tumbak instrumentalist who attended the classes held by the maestro Husayn Tehrani. He began his music studies when very young together with ‘Ali Tajvidi and Akbar Gulpayigani and secured a job for himself at Radio Tehran. At the same time, he performed in different orchestras. His performances can be heard more often on the Golha programmes than those of any other tumbak players, even though both in his solo performances as well as his performances when accompanying vocalists, soloists, and orchestras, the clear sound of his tumbak can be discerned above the other instruments. Near the end of his life he once commented that he had performed on more than 500 Golha programmes; his name is, at least, mentioned in 228 programmes. No albums of his for teaching the tumbak have been released but numerous CD albums have been released in which he is accompanied by different masters of Persian music. Amongst these, mention may be made of Tar-i Lutfu’llah Majd (Tehran: Ava-yi Khurshid 1383/2004). Malik was the most prolific instrumentalist performing on the tumbak in the Golha programmes.