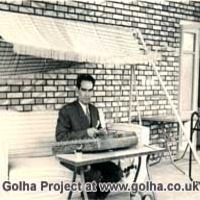 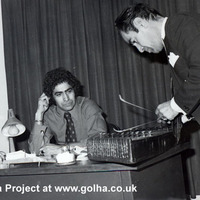 Solo instrumentalist performing on the santur and one of the most prominent musicians of the Golha programmes during the years 1955-1976. He received his preliminary musical education from his father. As a result of dedication and constant practice he made a name for himself as a musician in his hometown, Kashan, when he was only twenty years old. He was encouraged by the singer Husayn Qavami to move to Tehran where, in 1951, he began to work as a performer at the Iranian national radio and also playing in artistic circles that he  frequented. Despite the fact that he lacked a classical music education, his indisputable genius in performance and his wondrous creativity attracted the attention of many outstanding masters. In no time at all he found his way into the Golha orchestra and became one of its elite instrumentalists. The pleasant sound of his santur can be heard in numerous programmes, including Golha-yi rangarang, javidan, Barg-i sabz, Yik shakh-i gul, and Golha-yi sahra’i. He performed as a solo instrumentalist on these programmes, in many of which he was also accompanied by outstanding vocalists like Banan, Qavami, and Mahmudi Khwansari. Although no independent composition of his has been recorded or released, his work has profoundly influenced succeeding santur instrumentalists, just as his participation in the Golha programmes very much contributed to his own recognition as a master musician. Nonetheless, owing to his reclusive character during his own lifetime Varzanda did not enjoy the fame and recognition that he deserved. For many years after his demise, his work was considered to be the best improvisation ever yet performed by anyone on the santur, since he was unrivalled by any other santur instrumentalists. Beside recordings of him playing in the Golha programmes, films of his performances in public concerts and tapes of him playing for artistic private circles are also available. His works include a CD album titled Santur-i Riza Varzandeh with an introduction by Sayyid ‘Ali Riza Mir‘alinaqi (Tehran: Mahur 2007).